Cascade FC has been accepted into the RCL

After a rigorous application process and unanimous vote of its members, the RCS governing board has named Cascade FC the newest provisional member club of Washington Youth Soccer’s (WYS) Regional Club League (RCL). The RCL is the highest level of league competition under WYS and the governing body United States Soccer Federation (USSF). To better explain this league, here is the state’s definition:

Founded in 2010, Washington Youth Soccer’s Regional Club League (RCL), is comprised of the top clubs in the state
and provides the highest-level league play and player development.
To be named a Regional Club, Clubs must adhere to the Regional Club League Charter, which outlines rigorous standards
including criteria and levels of coaching licensure, player development curriculum and training guidelines
to ensure standardizations across the League and that all Clubs are of equivalent caliber.

What does that mean for Cascade FC?

Cascade FC is a proud member of Washington Youth Soccer and the NPSL. Becoming an official RCL provisional club member will add greater opportunities to place our teams in league play befitting their competitive needs, which aligns with our goal of developing players to their fullest potential. As well as the now well-rounded, competitive league play options to us in both the RCL and NPSL, we will continue to utilize the USSF and WYS’s Cup play tiering system by our competing in either Founders Cup, Presidents Cup, or State Cup.

For the 2021/22 season, we have had 5 teams competing in the RCL for their season league play through invitation, 3 of which finished Divisional champions, and 1 team finished joint top, just missing out on the head-to-head rule. We thank these teams for helping us pave the way to our provisional membership acceptance.

This is yet another step forward for our great club, and as always we are incredibly grateful for the support from our players’ families and our coaches. Best of luck to all teams competing in Presidents Cup this spring!

A link from the state explaining the RCL a little bit more in depth:   https://youtu.be/Ko7FPPpPBPk

Our inspiration was simple:

Celebrate our growth while staying true to our roots, to the spirit of our beautiful valley,

and to the club’s commitment to “Developing Excellence”.

We feel we have achieved our goal by modernizing the crest’s shape, by moving the ball to the base of the mountain range that inspires our club’s name, and by uniting the words “Cascade FC”. We’ve added Cascade colors for depth and finally adding our established date showcasing our proud 32 years. All this while still paying homage to our first and only crest.

Rejuvenation. We celebrate that Cascade FC is biggest it has ever been, offering expanded programming and soccer experience at all youth levels. We are playing in some of the highest competition levels ever, with a pool of coaches and players that we are incredibly proud of.

When will we see it?  Our new crest will be added to new player kit items and coach uniforms starting the 2022/2023 season in June. With this upcoming season being a uniform kit refresh year, it was a perfect time for the transition. You will also start to see its earlier transition into email communication, our website, and social media.

Can it be used earlier?  Simple answer, Yes! If you are creating end-of-seasons team items or gifts, please contact Sophie for new image. Besides the color, both all-white, and black/white images are also available.

What about old crest-branded items?  We are proud of our years together, why shouldn’t you be? Your fan-gear items are soon to be classics! As you replace them however, it should be fan gear with our new crest.

So here you have it, our NEW Cascade FC crest. Soon to be worn with pride by our fans, coaches, and players.  - Sophie and George 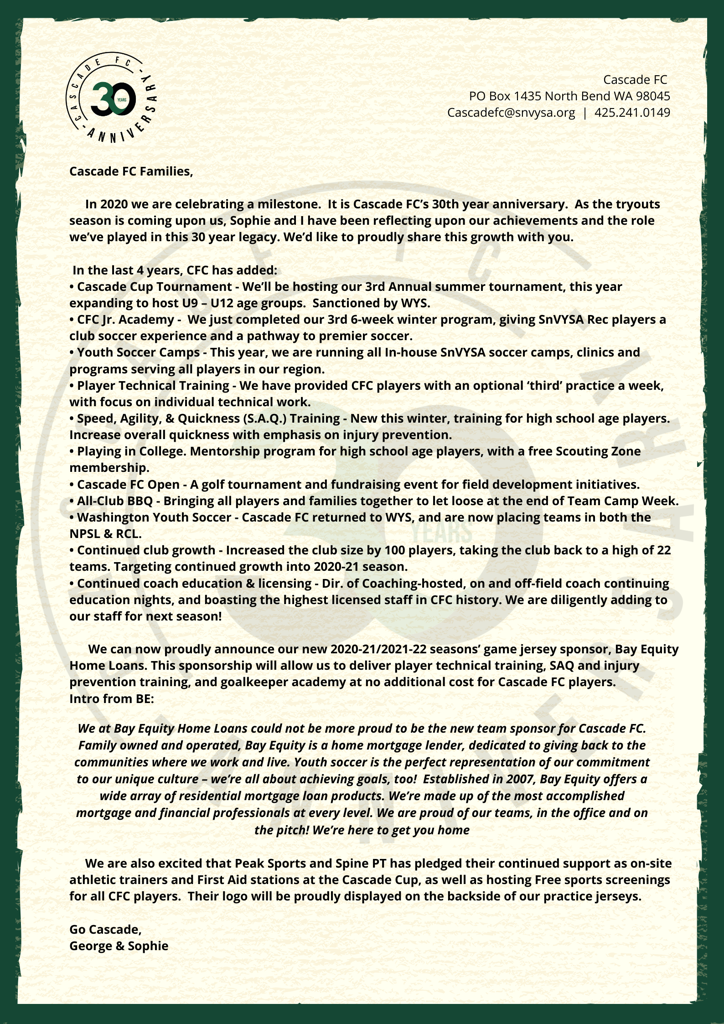